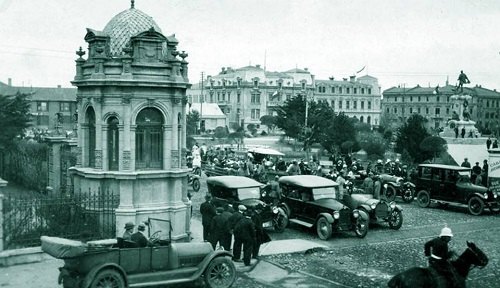 In 1520 the Strait of Magellan was discovered, becoming the main route between Europe and the Pacific Ocean. The name was given in honor of its discoverer, the Portuguese Don Hernando de Magallanes.

In 1843, the Chilean government sent an expedition to colonize the region, founding Fort Bulnes. Punta Arenas was originally a military fort. In December 1848, by order of the Governor José Santos Mardones, the residents of Fort Bulnes migrated to where the city is located now. The plan was to guarantee the presence of the Chilean State over the Strait of Magellan by taking the better conditions that this area offered, essentially for its water and wood provisions, ensuring subsistence needs of the population.

By 1870, intense livestock activities got build up, promoting the arrival of European immigrants (Swiss, Galician, Croats and Slavs, among others), who quickly joined the task of strengthening the village. Punta Arenas was also, since the start a major penal colony.

The criminal character of town survived until 1867, when the President José Joaquín Pérez made a new colonization policy for foreign immigrants, declaring Punta Arenas a "free port". This started the growth of Magallanes, in particular with the arrival of foreign colonizers who started all kinds of commercial establishments. Steam navigation avoided the disadvantages of the Straits crossing, increasing the vessels traffic and rising the interest of the central government for the Magellan Region.