Sara Braun came from her native Russia into the southern lands by the year 1874. She married in 1887 with the successful Portuguese entrepreneur José Nogueira, who had built his fortune thanks to the shipping activities, sea lions hunting and sheep farming. When Nogueira died of tuberculosis in 1893, Sara inherits and manage a large wealth, using part of it in the construction of her home.

Sara Braun chose the French architect Numa Mayer to design her future home, drawing the plans according to the taste and canons that prevail in Paris during the late nineteenth century. The palace exuberance contrasted with the simple housing style in the area at the time.

When Sara Braun died in 1955, the mansion was given to her nephews, which sold most of the furniture. The following year it was purchase by the “Club de la Union” (Union Club).

In 1982 it was declared national monument, since then the main characteristics of the building can´t be modified.

Over time, Sara Braun Palace has become for many, the most characteristic building in Punta Arenas, highlighted by its beautiful setting in front of the Plaza Muñoz Gamero, and surrounded by other national monument buildings.

In 1992, part of the building became the Hotel José Nogueira, housing it until the present day.

José Nogueira and Sara Braun, main characters of the pioneers´ history in the region. 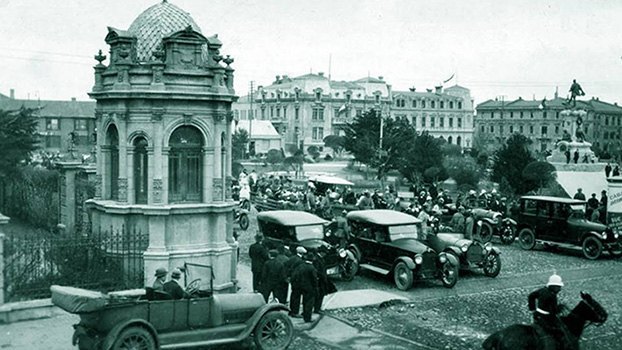 In 1886, José Nogueira marries Sara Braun, the eldest daughter of Elias Braun, his friend and partner. Their marriage lasted only six years, linking two of greatest fortunes in the region.

In 1893, after the death of the pioneer in Arequipa, Sara Braun took control of her husband businesses, sheep farming, commerce, shipping and industrial businesses. This is how she became the only woman entrepreneur of Punta Arenas, consolidating the grant of 1,300,000 hectares obtain by her husband in 1890, as well as joint venturing with other entrepreneurs as Peter H. McClellan, a wealthy English businessman, her brother Mauricio Braun, Jose Menendez, Elijah H. Braun, Gustavo A. Oehninger, Wilms and Ramon Guillermo Serrano, forming the largest sheep farming company of Patagonia.

She made significant charity donations throughout her life to institutions like the Sociedad de Dolores and La Gota de Leche, the Catholic Women League, the Red Cross, and the Orphanage of Punta Arenas. She also donated the entrance of Punta Arenas cemetery and the land for several schools. She also collaborated with organizations of Valparaiso and Vina del Mar, where after1930 she moved, finding a more favorable climate for her health. There she died in 1955 at age of 92.